The Society of Children’s Book Writers and Illustrators

The best thing about writing (besides publishing) is having a community of writers who have my back, folks I learn from and who are brutally honest about what is right and wrong with my manuscripts. For my children’s writing, the Society of Children’s Book Writers and Illustrators (SCBWI) critique group in Concord, Massachusetts, has been with me for three decades (with occasional breaks while I wrote about cancer and newspaper articles). [As an aside, this crit group is the oldest in the area and possibly in the national organization.] Some of those folks are:

Some of my writing support comes from groups that meet irregularly but provide support and passion well beyond the occasional hours we spend together. 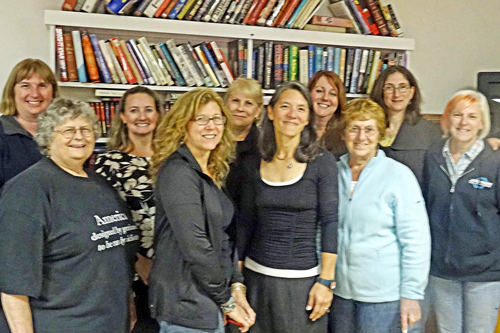 The Schmoozers have been meeting at the Poland Spring Camp Ground in Maine twice a year for nearly a decade. This awesome group of women (which often invites industry professionals to join us) includes:

The Loonies got our name not from any negative connotation regarding our mental status but because we met at Loon Mountain for extended weekends of dedicated writing, freewheeling critiques, and, when strict work hours were over, general merriment often including chocolate. That group includes:

When I was writing the first edition of Children with Cancer, the newly formed Central Middlesex Writers Guild was my support and guide. With the second edition, the Write Stuff, a critique group we formed at the Lincoln Public Library, suffered through chapter after chapter and helped me make the text accessible for non-medical readers. Among those long-suffering folks are: